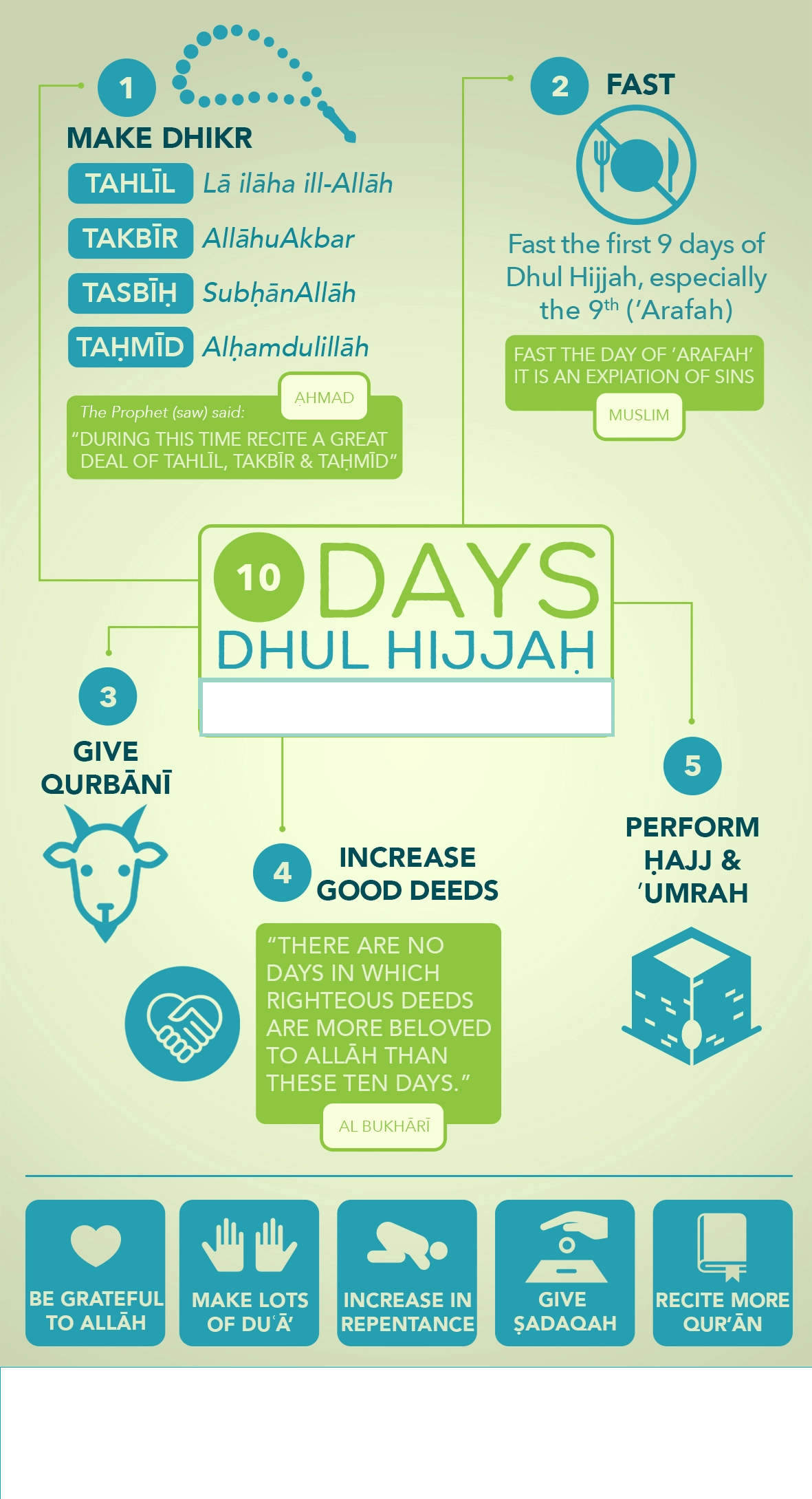 By DulwichislamiccentreThursday 30th June 2022No Comments

Thursday 30 June 2022 is the first day of the Islamic month of Hajj, Dhū Al-Hijjah.

Dhu Al-Hijjah is one of the holiest months in the Islamic calendar, SubhanAllah. We see two very exceptional occasions – all in devotion to Allah – during this month of elevated spirituality (SWT).

Thousands of Muslims travel from all over the world to perform Hajj in the holy city of Mecca, mash’Allah, for the sake of Allah. On the glorious day of Eid al-Adha, each of us who is able offers Qurbani in devotion to Allah and to support vulnerable people in need around the world, including right here in the UK, just as Prophet Ibrahim (AS) did.

In fact, the first ten days of Dhu Al-Hijjah are the holiest days of the year. We are advised to reach out to Allah (SWT) and sacrifice everything we have for His sake during these days, as we are loved by Him.

“Say, indeed, my prayer, my rites of sacrifice, my living and my dying are for Allah, Lord of the worlds. “

You will be blessed with reward from Allah in month of Dhu Al-Hijjah by paying your Zakah and Sadaqah throughout this wonderful month.

Make a sacrifice and support the Mosque and Muslims around the world as we recall Prophet Ibrahim’s (AS) hardship and dedication.

Dhu Al-Hijjah’s first 10 days are generally referred to as the greatest ten days of the year and a second opportunity after Ramadan. This is still a wonderful time of blessing and huge reward for those of us who are not performing the Hajj pilgrimage this year.

Those who are performing the holy journey of Hajj during these days have our hearts and prayers. While many of us may not be able to make the pilgrimage this year, there are still many opportunities to benefit from this month’s benefits.

The first 10 days of Dhu Al-Hijjah, according to many Qur’an scholars, are the days mentioned as significant enough for Allah to swear by them.

Those who are unable to perform Hajj should take use of this great opportunity to perform better actions than normal. Giving charity, honouring one’s parents, keeping familial bonds, and enjoining what is good and prohibiting what is evil are all examples of these. It’s also crucial to improve our necessary acts of worship by paying attention to our prayers and making sure we pay our Zakah. Furthermore, fasting and dhikr are especially advised in these blessed 10 days.

It is Sunnah for the Muslim to fast in the first nine days of Dhu Al-Hijjah, because fasting is one of the best of deeds that are solely for the sake of Allah. In a hadith qudsi, Allah says: “All the deeds of the son of Adam are for him, except fasting, which is for Me and I shall reward for it.” (Bukhari)

It is reported that “The Prophet used to fast in the first nine days of Dhu Al-Hijjah, and the day of ‘Ashura, and three days each month, the first Monday of the month and two Thursdays.” (Abu Dawood, 2/462)

The ten days of Dhu Al-Hijjah include Yawm Al-‘Arafat (the Day of ‘Arafat), on which Allah perfected His Religion.

The Prophet ﷺ said: “Fasting the day of ‘Arafah expiates the sins of two years: the past one and the coming one.” (Muslim)

“There are no days that are greater before Allah or in which good deeds are more beloved to Him, than these ten days, so recite a great deal of tahleel,  takbeer  and tahmeed during them.” (Ahmad)

While there are different versions, the takbeer can also be recited as follows:

In commemoration of the willingness of Prophet Ibrahim to sacrifice his son in obedience to Allah, Muslim families across the world offer Qurbani, the sacrifice of an animal. By arranging this through one of the many Muslim charities, you can ensure that the meat of the Qurbani is given to the poor and needy.

For those who are offering Qurbani, remember the Prophet ﷺ explained we should not cut our nails or hair from the beginning of Dhū Al-Hijjah until the day of Eid:

“When the ten days (of Dhū Al-Hijjah) commence and a person has a sacrificial animal, which he intends to slaughter, then let him not cut his hair or pare his nails.” (Muslim)

In these blessed days don’t miss your chance for charity – please donate to the DICM to support our vital community services. 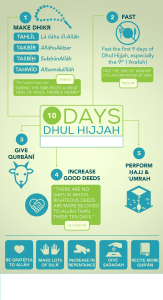 Although national restrictions have eased, to help keep us all safe please do Wudu (ablutions) at home, wear a face mask.

The Mosque will open 15 minutes before the congregational prayer and will close straight after prayer.
No one with COVID-like symptoms should come to the Mosque.

We will monitor the arrangements and adjust accordingly to keep the community safe.